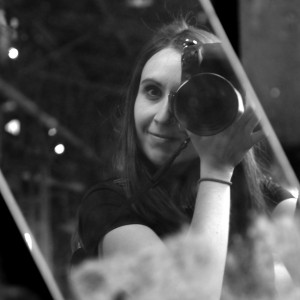 Behind the pseudonym of Metabisulfide hides Carole Cipone, born in 1980 in Forbach (Moselle, France). After tourism studies, in 2001, she buys herself an argentic camera, with her first salary.

As a self-taught artist , she started photography. In 2005, a major life change, she’s  started a graphic design training, which  compelled her to have a new outlook at what surrounds her and has begun to  experiment digital photography: she started refining the framing by opting for the square format, focusing  on details and abstract side, loitering  over colors and marked contrasts…

A society comes to life, builds and expends itself, changes and mixes with other civilizations and finally becomes something else: a new humanity.
In a society, an item is created for a specific function, built for a particular purpose. It is used at first, then it is considered as obsolete and abandoned. Without necessarily destroying it. It becomes an orphan of its own existence, we forget its primary function, time which elapses generates damages on it, mishandles or transforms it. Indeed, the true meaning of time, implicitly abstract, brings us to this vulgarized reality: “nothing is lost, everything is transformed”.
In that nothingness which became his own destiny, in the heart of his material world, not even conscious of his own existence, the lens of my camera transforms the object without his knowledge and gives it a new existential dimension, exiting its original atmosphere. In a context far away of its original reason for being, on which grafts its history by a new interpretation.
My eye, the neuralgic point of this process of transformation symbolizes, the in-between, the change of the object, from one state of its reality to another.
In opposition to the concept of anthropology (the study of humanity and of human groups), my artistic approach tends to evolve in the sphere that will be called “entitology”: study of the object and of the object groups. You have been an object, you are material, you will become another entity, once my eyes will have passed by.
At first, it was only an experiment that has become, time after time, a style, my style. The square format allows another approach to photography and framing with certain constraints that give strength to the pictures and what they represent. Up to date, the square format in general, is not absolutely the privileged format used by photographers, no offense, intuitively, it is mine, the one I explore without limit.